Islamic Education in the United States and Canada: Conception and Practice of the Islamic Belief System 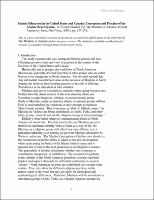 This study examines the way immigrant Muslim parents and their offspring perceive Islam and view its practice in the context of the Societies of the United States and Canada. Historically and at present, the worldview of North American Muslims has generally differed from that of other groups who are either natives of or immigrants to North America. Yet not until recently has any substantial research been done on the presence of Muslims in North America let alone on their learning patterns or the role of differing worldviews in the education of their children. Muslims may not be considered a minority ethnic group because they neither have the characteristics of the term minority ethnic nor Constitute a single linguistic, cultural, or socioeconomic group. Study of Muslims simply as minority ethnics or national groups will not help in understanding the variations in their attempts to maintain their Islamic identity. That is because, as Abdo A. Elkholy notes, "As Muslims in America are being assimilated, as Arabs, Turks, and other ethnic groups, many do not see the religious wrong in mixed marriage." Elkholy's observation relates to communicating Islam in North America on two levels. The first level is the way Muslims perceive themselves and hence identify with (a) Islam as a way of life, (b) Muslims as a religious group with which one may affiliate, or (c) nationality/ethnicity as an identity given to the Muslim subcultures by Western colonizers. The Muslim's perception of his/her own identity is the cornerstone in his/her ability to adjust to the new environment while maintaining the basics of the Islamic belief system and to transmit that system to the next generation in an integrative manner. This perception of identity determines whether one's response is assimilation, integration, or withdrawal. The second level pertains to the realities of the North American pluralistic societies and their implicit and explicit demands for individual conformity to societal "norms." North American societies are established on a secular value system. They may allow for different religious practices, in the narrow sense of the word, but may not allow for ideological and epistemological differences. Therefore, Muslims will be assimilated as subcultural groups (Arabs, Turks, etc.) despite vigorous attempts by Muslim leaders and organizations to maintain the Islamic identity. These leaders have failed to recognize that assimilation will persist as long as people's identity is in a state of confusion between ideological (Islamic), religious (Muslim), and ethnic (Arab, Turks, etc.) attachments. The clarity or confusion of one's identity is the key to the variation in Muslims' assimilation. The degree of Muslims' religiosity, as suggested by Elkholy, is only a part in the question of identification. The effort of any Muslim community in North America to formulate an educational program that will transmit the Islamic cultural and ideological heritage to its children is viewed here more as a conceptual than a socio-anthropological problem.

Copyright 1991, Oxford University Press. This is a pre-copyedited version of an article accepted for publication in the edited book The Muslims of America following peer review. The definitive publisher-authenticated version is available through Oxford University Press: http://www.oup.com/us/catalog/general/subject/ReligionTheology/Islam/?view=usa&ci=9780195085594. See also: http://www.eself-learning-arabic.cornell.edu/publications.htm#4

Islamic education in the US and Canada; Conception and practice of Islam; Islamic identity; Islamic cultural heritage; Conceptual understanding of Muslims