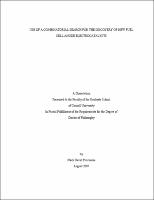 Polymer electrolyte fuel cells are devices that convert chemical energy to electrical energy through oxidation of a fuel (typically hydrogen, methanol, or ethanol) at the anode and reduction of oxygen at the cathode. They have the potential to be more efficient and less environmentally harmful than combustion engines and other heat transfer processes for the extraction of energy. Pt is a typical anode electrocatalyst, but it suffers from slow kinetics for methanol and ethanol oxidation and is susceptible to poisoning from impurities, even for hydrogen oxidation. Although several notable materials discoveries have improved anode electrocatalysts, the materials are far from ideal. While previous research has shown that ordered intermetallic compounds may be better electrocatalysts than those presently used, an investigation through all possible binary and ternary component electrocatalysts using traditional synthesis methods would take an inordinate amount of time. We use a combinatorial method to more quickly search through the majority of compositions in binary and ternary phase diagrams for better fuel cell anode electrocatalysts than Pt. We deposit thin film composition spreads of up to three elements that cover up to 75% of a phase diagram. We test the compositions for electrocatalytic activity for methanol and ethanol oxidation using a fluorescence screening method and characterize the composition, surface morphology, and crystal structure of active regions. We synthesized and tested films of Pt-Ru-X (where X = Pb, Co, Ni, Ag, V, Mo, Fe, In, and Sb), Pt-Pb-X (where X = Bi, Sn, Mo, Co, Cr, Fe, Nb, Ni, Si, Ta, and In), and Pt-Nb-X (where X = Co, In, Ni, Sb, and Fe). Of all the films tested, a Pt-Pb-Ta film deposited at 405C has an active region for methanol oxidation with the lowest onset potential of -50 +/- 25 mV vs. Ag/AgCl, bulk composition of Pt0.65Pb0.02Ta0.24O0.09 (measured by WDS), and an fcc Pt structure type. Pt-Ru-Pb films deposited at ambient temperature have regions with the lowest onset potentials for ethanol oxidation: the average onset potential is -235 +/- 25 mV vs. Ag/AgCl, the average bulk composition is Pt0.42Ru0.45Pb0.04O0.09 (measured by WDS), and the structure type is fcc Pt.