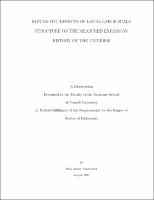 We discuss some of the ways that local cosmological inhomogeneity has been found to affect our interpretation of the measurements of the redshifts and luminosity distances of Type Ia supernovae, so that we may ask: Can a matter dominated universe, with gravity governed by general relativity, appear to be accelerating? This discussion focuses on the systematic corrections to measured cosmological parameters that one would find as a result of the ``fitting problem", wherein the fitting of data to what we would see in a homogeneous universe introduces errors due to the nonlinearity of general relativity. It has been suggested that this fitting effect could explain the supernova data without introducing dark energy or modifications of general relativity. We explore this claim within the context of several cosmological scenarios, all of which use standard general relativity and are dust dominated, with no dark energy. First, we use the spherically-symmetric Lema\^{i}tre-Tolman-Bondi cosmological models, then we look at a simple model for cosmological voids and sheets, and finally we treat the problem in full three dimensional generality. In each of these contexts, we analyze the systematic corrections to the luminosity distances and redshifts of Type Ia supernovae that result from local large scale structure. We then find how such corrections affect the properties of the Universe that we infer from this measured luminosity distance-redshift relation. We show how, in principle, a very large degree of inhomogeneity can trick us into thinking that the expansion of the Universe is accelerating when it is not. However, within the confines of more realistic models, such effects are shown to be small. In the full three dimensional case, we find that the error in the best-fit cosmological constant is approximately $\Delta\Omega_{\Lambda}\approx 0.004$ for a large sample of supernovae at small redshifts, between $z_{min}=0.02$ and $z_{max}=0.15$. Although this error is not large enough to explain the measured cosmological constant value $\Omega_{\Lambda}\approx 0.7$, it is still a potentially significant systematic error that has not been accounted for previously.