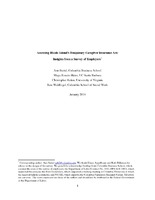 This report provides new evidence on Rhode Island’s Temporary Caregiver Insurance (TCI) law, which took effect in January 2014, based on a survey of small and medium-sized businesses in the food services and manufacturing sectors in Rhode Island, Connecticut, and Massachusetts that we carried out in December 2013 (just before the law came into effect) and in January/February 2015 (one year after the law came into effect). We collected information about firm characteristics and productivity, employee life events and work flow, and employer-provided benefits. Comparing Rhode Island employers pre-and post-law to Massachusetts and Connecticut employers over the same time period, we found little evidence of significant impacts of the law on employers (although we note that the sample size for these estimates was small; 104 employers in Rhode Island, and 133 in the other two states combined). We also asked Rhode Island employers directly about their views towards TCI one year after it came into effect and found that a majority of the 213 Rhode Island employers interviewed in 2015 support the new law. Thus, our results suggest that laws like Rhode Island’s TCI may not have significant impacts on small and medium-sized employers and could garner support by such employers once they have experienced them.