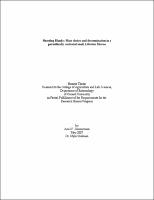 The trematode parasite Cryptocotyle lingua completely castrates both male and female Littorina littorea snails that it infects. Selection should favor males who distinguish between fertile and parasitically-castrated females when choosing mates. I addressed this question by sampling mating pairs in the intertidal and those snails in their immediate vicinity. I compared the frequency of infection in females in mating pairs with that of ambient non-mating females to determine if the frequency of infection was significantly lower in mating females. In addition, to test the assumption that infected males were physiologically incapable of initiating copulatory behavior, I compared the infection prevalence of mating males with that of non-mating ambient males. I found that there was no significant difference in the infection prevalence between mating and non-mating females, indicating that males were not distinguishing between infected and uninfected females. This may be the case due to high levels of gene flow between highly infected and unexposed populations, insignificant costs associated with wasted mating attempts for males, or low heritability of the means for detecting infection in females. Infection prevalence in mating males was nearly significantly lower than that of non-mating males. However, the surprising frequency of infected males mating (15%) suggests that gonad health is not a pre-requisite for initiating copulatory behavior.