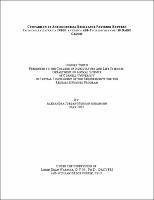 The primary objective of this study was to compare antimicrobial resistance patterns of Salmonella enterica with Escherichia coli isolated from the same dairy calves. Fecal samples were collected from February 2004 to September 2005 from 74 calves. Calves with at least one Salmonella isolate and one E.coli isolate were included in our analysis. The 148 isolates collected from the 74 calves were tested using a broth tube dilution method for determining resistance to several antimicrobial agents (n=14): AMP, APR, CEF, CHL, ENR, FLO, GEN, NEO, OXY, SPE, SCH, SDI, STH, and TRI. Considering resistance to individual drugs, the percent of E.coli isolates with resistance was over 50 for 11 drugs and the percent of Salmonella isolates resistant was over 50 for 9 drugs. From the antimicrobial resistance patterns generated for E.coli (n=42) and Salmonella (n= 22), the bacteria were found to have 6 identical patterns in common. From these 6 patterns the most common pattern showed resistance to AMP, CEF, CHL, FLO, NEO, OXY, SCH, SDI, and STH. The association of antimicrobial resistance between Salmonella and E.coli for the same calves for individual antimicrobial agents proved not statistically significant. This study showed that resistance to drug classes important in human and animal medicine was common in Salmonella and E.coli from clinically ill calves. Overall, E.coli isolates were more resistant than Salmonella. While there were shared patterns of resistance (n=6) between Salmonella and E.coli, Salmonella isolates were not significantly more likely to be resistant to individual antibiotics if a calf had a resistant E.coli. Results suggest that selection pressure from recent exposure to drugs or interspecific gene transfer was not resulting in a strong association of resistance between the bacteria.