Threat and Bias: Understanding the Role of Threat in Attitudes towards Race, Gender, and Sexual Orientation 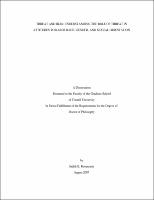 This research project is motivated by the question of what type of relationship exists between threat and bias. Such a relationship has been demonstrated for racial bias and theorized for sexism and heterosexism; however the nature of the relationship is unknown. In particular, it is unclear whether threat functions at the individual level, group level, or both levels simultaneously. This is accomplished by considering three types of bias: sexism, racism, and heterosexism. All three analyses utilize virtually identical background measures and employ ordered logistic and multinomial logistic regressions, with differing outcome measures and threats. Each paper begins by considering how the relevant literatures treat threat and bias. They then examine the same four hypotheses describing the possible relationships between individual threat, group threat, and biased attitudes. The gender and race analyses utilize the General Social Survey. Attitudes towards policies aimed at promoting gender equity are the outcome measures for the gender study, while attitudes towards policies aimed at promoting racial equity are the outcome measures for the race analysis. Threat measures assess perceptions of the impact of the women?s movement on individuals and men (gender analysis) and perceptions of white job security and stability (race analysis). The sexual orientation analysis relies on student data, because there are no available datasets with appropriate measures of individual and group threats. A questionnaire was developed and administered to undergraduate students at an elite Northeastern university. Unlike the other two analyses, the results from this study are not generalizable; however, they should provide an indication of whether the trends identified with gender and racial attitudes may carry over to opinions regarding sexual minorities. Outcomes are attitudes towards legalizing gay marriage and providing same-sex couples with job benefits The results confirm the link between feelings of threat and negative views of the out-group. All three analyses demonstrate that individual threat and group threat are simultaneously associated with opposition to policies aiding the subordinate group. Furthermore, the results suggest the possibility of a proxy relationship between individual threat and group threat.