Decolonizing Mimesis in the Works of Jessie Fauset, David Bradley, and Nelly Rosario 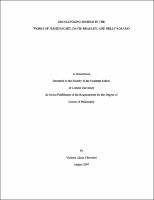 DECOLONIZING MIMESIS IN THE WORKS OF JESSIE FAUSET, DAVID BRADLEY, AND NELLY ROSARIO Victoria Alicia Chevalier, Ph.D. Cornell University, 2007 Decolonizing Mimesis in the Works of Jessie Fauset, David Bradley, and Nelly Rosario historicizes the category of mimesis by tracing its function as a modality in 20th Century African American Literature. Decolonizing Mimesis interprets the modalities of mimesis across disciplinary schools of thought as a historicized literary function, not a trans-historical category. For this reason, in different historical contexts in African American literature, mimesis takes on different possibilities for the black subject of language in a decolonizing frame. The works upon which I focus engage what occurs when the problem of mimesis as a category of interpretation presses up against the problem of African American representation. Jessie Fauset?s Plum Bun and The Chinaberry Tree, David Bradley?s The Chaneysville Incident, and Nelly Rosario?s Song of the Water Saints engage the ways in which black subjects in representation destabilize the logic of identity as irreducible difference that underpins scientific racism and racist practices in America, and through contact with America; simultaneously, these works insist upon an understanding of a shared vernacular, because inherited history constitutive of ?race? through the attainment of a decolonizing and, therefore, oppositional position within discourse. This position within language is specifically rendered through the literary tropes ellipsis, caesura, and aporia. These tropes are themselves figures for a blank space, a silence, or a pause whose presence in these texts is visible and invisible, legible and illegible. Decolonizing Mimesis argues that the transformative work of identification, as opposed to identity, is the primary project with which the aspects of the interior world are represented throughout these texts. In an attempt to stave off the putative annihilation of racial uplift, these works argue for a black world in which play is possible, indeed necessary, for decolonizing representational properties acquired by black subjects. Although the early chapters of the dissertation focus on the literary project of the Harlem Renaissance as it is understood by Jessie Fauset, I pay attention throughout to the way the novels are concerned with modalities of mimesis expressed in psychoanalytic, narrative, and aesthetic paradigms, particularly regarding the ritualization of history and memory. I demonstrate, for instance, that Fauset?s work relies on figures of visuality and visual technologies to organize modern identification rituals and subject-formation established in psychoanalysis; Nelly Rosario?s work constitutes the limits of a nascent and oppositional Caribbean historical narrative represented by the discontinuities of an alternative and black postmodernity; and both confront history through visual and narrative mimetic models that necessarily fail to inscribe a black feminine subject across the fallacy of binaries ?self/other,? ?masculine/feminine,? ?white/black.? Finally, my chapter on David Bradley?s The Chaneysville Incident argues that this text participates in a similar logic which motivates Fauset?s and Rosario?s work. A potential alternative sexuality, and therefore a different relation to memory and history link Bradley?s work to Fauset and Rosario?s representation of repressed, black subjects. The novels I focus upon in this dissertation argue that history inevitably brings itself to bear; therefore the only way to effect literary and social change is through praxis, through a confrontation with linguistic and figurative historical forms, themselves inherently political.