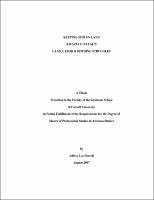 This thesis explores the common roots of several contemporary social movements in Durban, South Africa. My point of departure is a series of community meetings in May, June, and July 2006, during which geographically separated Black and Indian community organizations expressed remarkably similar grievances against the municipality and government, all rooted, I argue, in the colonial dispossession and alienation of Africans, and later in the enforced marginalization of Indian communities. Largely, these dispossessions occurred in the 19th century and early in the 20th century ? decades before the policy Apartheid begin in 1948. It is the continued relationship of exclusion and repression in relation to land and space in Natal, I argue, that accounts for the common struggles of these movements. I shall cite Antonio Gramsci extensively in order to argue that his conceptions of ?consent? and ?coercion? explain the perpetual success of policies designed to preserve colonial and Apartheid dispossession. Moreover, several labor struggles will be considered in order to illustrate the degree to which the majority?s consent has been secured, and to offer evidence that Gramsci?s theories are powerful assistance to us. Moreover, Mahmood Mamdani?s identification of ?subject? and ?citizen? will factor, as the transition from Apartheid to ANC rule has essentially cemented the status of landless South African subjects. His lengthy iteration of indirect rule in Apartheid South Africa will become crucial to understanding how the transition was ineffectual for many. In addition, by surveying documents relating to the management and control of these populations, I argue that (KwaZulu-)Natal?s managers, through several succeeding governing regimes, have implemented policies of great similarity to achieve the same effect ? keeping the power of land and space of Natal in the hands of Europeans. These movements represent, I believe, an iteration of a continued resistance to policies of exclusion from and access to valuable land and space in the province. From their concerns and mobilizations, I will finally attempt to construct an understanding of what has, and has not, changed in South Africa.