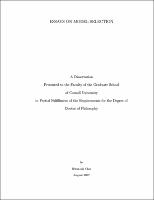 Model selection and nonnested hypothesis testing procedures are considered in three papers. The papers generalize the existing testing procedures and propose methods to improve approximations to the sampling distribution of the test statistics. The first paper proposes robust tests which generalizes the $J$ test (Davidson and MacKinnon (1981)) and the $F$ test (Deaton (1982) and Dastoor (1983)) for non-nested dynamic models with unknown serial correlation and conditional heteroskedasticity in errors. In the second paper, a model selection procedure based on a general criterion function, with an example of the Kullback-Leibler Information Criterion (KLIC) using quasi-likelihood functions, is considered for dynamic non-nested models. I propose a robust test which generalizes Lien and Vuong's (1987) test with a Heteroskedasticity/ Autocorrelation Consistent (HAC) variance estimator. In both papers, I use the fixed-b asymptotics developed in Kiefer and Vogelsang (2005) to improve the asymptotic approximation to the sampling distributions of the test statistics. The fixed-b approach is compared with a bootstrap method and the standard normal approximation in Monte Carlo simulations. The third chapter considers the nonnested hypothesis testing of Vuong (1989) for which the null hypothesis is that the candidate models are equidistant in KLIC from an unknown true model. I propose a higher order asymptotic bias correction of the test statistic and show that it is invariant with respect to reparameterization. The reparameterization invariance leads to the differential geometrical approach where coordinate system invariant quantities like curvature are useful for understanding the corrections. The relationship of the correction factor with the preferred point geometry of Critchley et al. (1993, 1994) and the expected geometry of Amari (1982) is illustrated.