Immigration Enforcement Within the United States 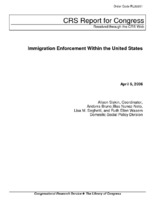