Reflections of a Military Medium: Ritual and Magic in Eleventh and Twelfth Century Chinese Military Manuals 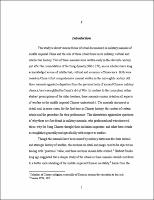 REFLECTIONS OF A MILITARY MEDIUM: RITUAL AND MAGIC IN ELEVENTH AND TWELFTH CENTURY CHINESE MILITARY MANUALS Marcia Butler, Ph. D. Cornell University 2007 This dissertation considers ritual documented in comprehensive military manuals--a genre that fully emerged during Song dynasty China (960-1279 AD)--and its role in Song cultural and intellectual history. These manuals represent the earliest documentation of such rituals, and include prayer texts, instructions for sacrifice, moral admonitions, war initiation and conclusion rites, reading the ether, and sorcery techniques. The Song military system provides a good case study for determining specific beliefs and how those spread because of the nature and function of the system; its social composition, collective potential, inherently violent motivation, mobility, and organization. The study makes the case that rituals in these manuals, which many scholars have dismissed as irrelevant to the Song military project, were an integral part of Song warfare. Such rituals reveal syncretic systems of thought and belief practiced during the Song. Using 'magic' and occult rituals, the study explores the production of social collectivities within the Song military and shows how specific rituals produced various sorts of power. Among the latter, the universal force of yin, not yang (as might be expected), was the domain for production of power. I augment the prescriptive texts of the manuals with descriptive sources--encyclopedia, official histories, battle diaries and anecdotal accounts--to determine actual performances, both within the military and at court. These rituals provided sites of contention and comprised an arena for discourse between the groups that made up the military and the imperial court. With respect to the latter, the study investigates the dynamic of the supposed separation between the civil (wen) and the martial (wu), commonly attributed to the Song, and finds that the separation was not as definitive or unambiguous as is commonly portrayed. Finally, detailed analysis of various rituals shows that they were based on visual representations (xiang) that figured largely in competing Song cosmological schema. As these representations detached from their originating text, they were ritually transformed and then incorporated as cultural and supernatural emblems that mimicked natural forces and became themselves objects for manipulation and sources for the production of power.