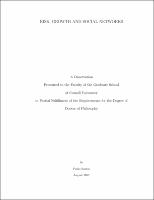 This dissertation is an empirical investigation on the microeconomics of growth, focusing on the role of shocks and on the formation of credit networks. It uses original data, collected in Southern Ethiopia, an environment where nonlinear wealth dynamics that are at the root of persistent poverty were previously identified. The first chapter briefly places this work in the wider context of the development economics literature. The second chapter explores the causal mechanisms behind the nonlinearities identified in earlier work. It focus on the role that not only climatic shocks but also ability play in shaping different accumulation patterns. It is found that herders of low ability are expected to converge to a unique dynamic equilibrium at a small herd size, while those with higher ability exhibit multiple stable dynamic wealth equilibria. The third chapter of this dissertation validates a new approach to the collection of data on social relations that starts with a random sample of individuals and then randomly samples from the prospective relationships among sample respondents. Using original data from southern Ethiopia it is shown that this method yields estimates of the structure of social relations that are statistically indistinguishable from those generated by tracing respondents' local networks. Through the use of Monte Carlo simulation, it is also shown that introducing this second level of sampling improves the accuracy of the inference on the determinants of network formation. The last chapter explores the effect of herd dynamics on the formation of credit networks. It finds that the threshold at which wealth dynamics bifurcate serves as a focal point at which credit transfers are concentrated and that asset loans respond to recipients' losses as long as the recipients are not "too poor". These results suggest that, when shocks can have long term effects, asset transfers may aim to insure the permanent component of income generation, rather than the transitory component, as it is commonly assumed. The chapter also shows that the persistently poor are less likely to be known within their communities and less likely to receive transfers in response to shocks.