Developmental Changes in Infants' Knowledge of the Instrumental Value of Babbling 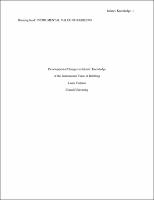 The present study sought to discover the age at which infants realize that their vocalizations may be used to elicit social responses from others, and to examine whether infants? knowledge of the consequences of their babbling is related to their primary caregivers? natural levels of responsiveness. Participants were 27 caregiver-infant dyads from the Ithaca, NY area. Infants were 2 and 5 months of age. Infants participated in an unstructured play session with their caregivers, followed by a still-face interaction with an unfamiliar experimenter who initially engaged the infants, and then became quiet and assumed a neutral expression. Five-month-olds exhibited a significant increase in the quantity of non-cry vocalizations from the first interaction period to the still-face, thus demonstrating that they have learned that their vocalizations have an effect on others. Two-month-olds did not show a significant change in the quantity of vocalizations. No significant relationship was found between caregiver responsiveness and infants' vocal behavior across the still face.