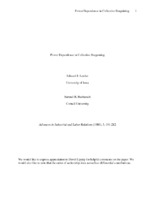 [Excerpt] The purpose of this paper is to review and extend the implications of a dependence theory of bargaining power. This theory advances a much more complex conception of power than is typically found in either the general literature on power or the collective bargaining literature. The paper will identify certain paradoxes posed by dependence theory. These paradoxes help to illustrate the value of the theory in understanding the power relationships between labor and management, how these relationships can change over time, and how tactical action within particular contract negotiations can produce positive effects on the relationship that are not intended by actors. For example, Emerson (1972), who first delineated the general features of power-dependence theory, suggested one such paradox: “To use power is to lose it.” This is a rather provocative - and to some, perhaps, a seemingly ludicrous - notion that actually makes sense if one considers the longer-term effects of tactical actions that take place in particular collective bargaining negotiations. In our earlier work, we modified power-dependence theory (Bacharach and Lawler, 1981a) and suggested that tactical efforts to change the power relationship can, under some conditions, have an integrative effect on labor-management relations, thus posing another paradox that the use of power does not necessarily have negative or disintegrative consequences.