The Effects of Emotion on False Memory Production 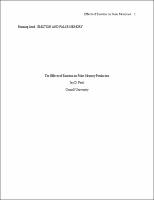 This study seeks to investigate the effects of emotion on false memory production. 114 undergraduate college students participated in the study. Subjects were given an emotion induction task that induced positive, negative, or neutral moods by rating person descriptive words taken from the Dumas norms. Each subject was then asked to listen to lists of study words taken from the Deese-Roediger-McDermott paradigm and was then given an immediate recognition memory test. One week later, subjects were given a delayed recognition memory test to measure the degree of forgetting. Results indicate that on the immediate test, although there were no differences observed across emotion conditions for true memory, participants in the negative emotion condition were more prone to produce false memories than those in the positive or neutral conditions. In addition, there was no main effect of emotion for the immediate test, but there was one for the delayed memory test. It was found that acceptance rates of both targets and critical distractors decreased for participants in the negative emotion condition relative to positive and neutral conditions. It was also found that one could inoculate the effects of forgetting on a delayed memory test by giving subjects a prior memory test.