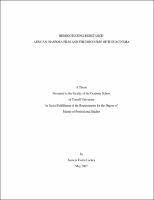 Emerging out of the context of the tricontinental revolution of the 1950s and 1960s, Third Cinema refers to a host of film practices from Latin America, Africa and Asia with the political intent of the decolonization of culture. For contemporary filmmakers and critics, however, the discourse of Third Cinema cannot be easily applied to contemporary times and contexts. In this thesis, I attempt to reconcile the discourse of Third Cinema with contemporary African diaspora film practices in a renegotiation of cinematic resistance. Proceeding from Gilles Deleuze's theory that the evolution of cinema from classical to modern materialized out of the historic rupture produced by World War II, my thesis locates another rupture in the dissonance between Third Cinema and contemporary African diasporic filmmaking. The lingering effects of neo-colonialism and the process of globalization have rendered older categories to describe the world inadequate, and filmmakers all over the world are actively engaged in decentering the grand narratives of Western and Third Cinemas. Because this deconstructive process is most often associated with the diasporic condition by postcolonial theorists, I argue that a "diasporic turn" has occurred within cinema that shapes contemporary film narratives and aesthetics. Although my use of the term "diaspora" is conceptual rather than geographical, in my thesis the African diaspora, historically constructed through the process of forced and voluntary migration, operates as a unit of analysis for exploring the "diasporic turn." Through the analysis of three films from the African diaspora, my thesis not only explores the postcolonial and diasporic issues with which the discourse of Third Cinema must reconcile in order to have contemporary relevance, but it also gestures towards a new discursive framework for characterizing contemporary African diasporic film practices.