The Effects of Higher Admission Standards: An Analysis of Intercollegiate Athletics 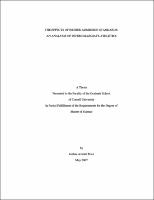