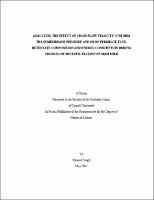 Pasteurized skim milk at pH 6.50 and 6.00 was microfiltered at 50oC using 0.2-mm membranes. A factorial design of three cross flow velocities (CFV) of 5.3, 5.8, 6.3 ms-1 and three uniform trans membrane pressures (UTMP) of 68.9, 103.4, 137.9 kPa was utilized. High CFV combined with high TMP required the shortest time (up to 40%) to achieve a concentration factor (CF) of 8-10x. Starting flux was 20 to 50% higher at pH 6.50 when compared to pH 6.00 due to solubilization of micellar calcium and severe fouling at lower pH. Higher flux was always obtained by using the combination of high CFV and high UTMP, which results in high shear and 33% reduction in gel layer (CG) with back transport of rejected molecules into the retentate stream due to better (almost double) mass transfer coefficient (kc). Higher CFV also reduced whey protein retention by 33%. Cross flow microfiltration (CFM) at lower pH (6.00) reduced calcium retention and lowered calcium to true protein ratio by 50% at 10x, compared to 8x retentate at pH 6.50, though 10x retentate had 20% higher casein concentration. Higher UTMP helped maintain high flux and thus shorten the run time up to a CF of 6-7x, but resulted in severe fouling and a steep decline in flux and increased whey protein retention as the process was continued to higher concentrations (8-10x). Overall energy consumption was always lower due to shorter CFM process when skim milk was microfiltered to 8x at higher CFV and higher UTMP.