Life history and genetic diversity in desert reptiles and amphibians 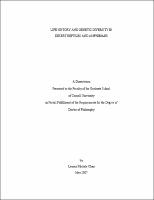 The overarching goal of my dissertation research is to understand the link between organismal biology and patterns of population genetic structure across temporal and spatial scales. I focus on three vertebrate species that inhabit the deserts of the southwestern United States and that have habitat requirements and life history traits likely to promote population genetic differentiation. Chapter one examines genetic structure in a lizard endemic to sand dune patches within a shinnery oak dominated landscape in eastern New Mexico. I used mitochondrial DNA and microsatellite markers to examine the effects of historical and contemporary processes on genetic structure across the geographic range of Sceloporus arenicolus. I found three main genetic clusters based on mitochondrial data with significant population differentiation within each group at microsatellite loci. These data suggest that specialization on and colonization of the shinnery oak ? sand dune landscape may be relatively recent and that the distribution of suitable habitat at fine scales may be less important to population connectivity than the persistence of larger networks of suitable habitat patches. Chapters two through five address the maintenance and distribution of genetic diversity within and among breeding ponds for two syntopic anurans in Arizona and New Mexico. I examined the consequences of reproductive skew and larval mortality on the persistence of genetic diversity across generations and among breeding aggregations of the Great Plains Toad (Bufo cognatus) and Couch?s Spadefoot Toad (Scaphiopus couchii). Reproductive skew results in reduced genetic diversity in some, but not all, populations of both species, with a greater effect in larger ponds of B. cognatus. Larval mortality influences genetic diversity only when mortality rates are extremely high or when the larval duration is prolonged. I found high effective population sizes and only weak genetic differentiation at large geographic distances in contrast to expectations based on within pond patterns, desert landscapes, and the scale of genetic structure found in other amphibians. In these desert environments, amphibians are remarkably well-connected by gene flow despite a pronounced effect of within pond processes on the maintenance of genetic diversity.