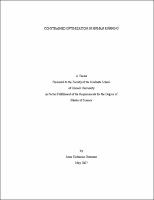 Walking humans spontaneously select different speed, frequency, and step length combinations depending on which of these three parameters is specified. This behavior can be explained by constrained optimization of cost of transport (metabolic cost/distance) where cost of transport is seen as the main component of an underlying objective function that is minimized within the limitations of specified constraints. It is then of interest to ask whether or not such results are specific to walking only or indicate a more general feature of locomotion control. The current study examines running gait selection within the framework of constrained optimization by comparing self-selected running gaits to the gaits predicted by constrained optimization of a cost surface constructed from cost data available in the literature. Normalizing speed and frequency values in the behavioral data by preferred speed and frequency reduced inter-subject variability and made group behavioral trends more visible. Although actual behavior did not coincide exactly with running cost optimization, self-selected gait and predictions from the general human cost surface did agree to within the 95% confidence interval and the minimal cost + 0.005 mLO2/kg/m region. This was similar to the level of agreement between actual and predicted behavior observed in walking. Thus, there seems to be substantial evidence to suggest that 1) Selection of gait parameters in running can largely be predicted using constrained optimization and 2) General cost surfaces can be constructed using metabolic data from one group that will roughly predict the behavior of other groups.