A Defense of Non-reductive Physicalism 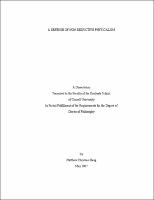 I develop a novel formulation of, and argument for, non-reductive physicalism - roughly, the view that mental properties are natural properties that are realized by, but not identical to, neural and other low-level physical properties. Non-reductive physicalism has long been the dominant view in the philosophy of mind but has recently been challenged from two main directions. The first type of attack, the causal exclusion problem, points out an apparent inconsistency in non-reductive physicalism. The second type of attack focuses on the multiple realizability of mental properties: questioning either its prevalence or its efficacy in blocking reduction. In response to the exclusion problem, I first argue that one of the claims used to formulate the problem, the completeness of physics, has two parts and that there is no single domain of physical entities that is the smallest domain of which both parts are true. The conflation of these two parts has made it appear that non-reductive physicalism is inconsistent. I then show how to use the two completeness claims as part of an argument for a form of physicalism that need not be reductive. In response to the second type of attack, I provide a novel basis for the irreducibility of mental properties. I argue that irreducibility is ultimately grounded in relations between mechanisms, of which multiple realizability is merely one facet. The other facet, multiple determinativity - in which a single physical property realizes several different kinds of high-level properties - is equally effective at blocking property reduction. Thus, even if the doubts about the multiple realizability of mental properties (and its efficacy in blocking reduction) were sound, this would not undermine non-reductive physicalism. Another virtue of this framework is that it provides an adequate metaphysical basis for some of non-reductive physicalism's explanatory claims - e.g., that high-level explanations are sometimes deeper and theoretically more fecund than low-level physical explanations.