Accounting for Income Inequality and its Change: A New Method, With Application to the Distribution of Earnings in the United States 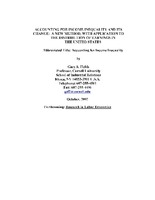 [Excerpt] This paper devises a new method for using the information contained in income-generating equations to "account for" or "decompose" the level of income inequality in a country and its change over time. In the levels decomposition, the shares attributed to each explanatory factor are independent of the particular inequality measure used. In the change decomposition, methods are presented to break down the contribution of each explanatory factor into a coefficients effect, a correlation effect, and a standard deviation effect. In an application to rising earnings inequality in the United States, it is found that schooling is the single most explanatory variable, only one other variable (occupation) has any appreciable role to play, and all of schooling's effect was a coefficients effect.

Required Publisher Statement: ©2003 JAI Press, Inc.. Reprinted with permission. Final version published as Fields, G. S. (2003). Accounting for income inequality and its change: A new method, with application to the distribution of earnings in the United States.Research in labor economics, 22.