The Collective Bargaining System in the United States: The Legacy and the Lessons 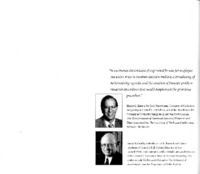 [Excerpt] From World War II to the 1990s, the collective bargaining system in the United States evolved through two epochs. The first, which lasted from the end of war to the late 1970s, saw the construction and consolidation of what one of us (and his coauthors) has called "the New Deal system of industrial relations" (Kochan et al, 1994). During the second era the New Deal industrial relations system came under severe pressures and it began to be fundamentally transformed. The transformation is still occurring, and we cannot say if or when a new equilibrium will be established. This essay examines and evaluates the evolution of collective bargaining in the United States between 1945 and 1997. We have a central theme - an hypothesis - that guides our examination. We believe American collective bargaining has been very adept at resolving workplace problems—what might be termed "micro" problems such as individuals' complaints (in unionized settings). On the other hand, collective bargaining in our society has never been adept at (or has been excluded from) dealing with "macro" problems. We have in mind two categories of macro problems. The first is "macro-organizational," by which we mean the issues and concerns associated with the management of the organization or enterprise. The second is “macroeconomic," and we have in mind especially the relationship between the industrial relations system and the macroeconomy.