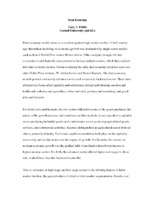 [Excerpt] Dual economy models arose as a reaction against single sector models. A half-century ago, theoretical modeling of economic growth was dominated by single sector models such as that of Nobel Prize winner Robert Solow. Other analysts, though, felt that economies would better be characterized as having multiple sectors, which they stylized into dual economy models. Foremost among the early dual economy modelers were two other Nobel Prize winners, W. Arthur Lewis and Simon Kuznets. The dual economy models posited a relatively advanced sector and a relatively backward sector. These have alternatively been called capitalist and subsistence, formal and informal, modern and traditional, industry and agriculture, urban and rural, primary and secondary, and good-jobs and bad-jobs.