Guestworker Programs Lessons from the Past and Warnings for the Future 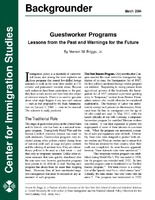 Immigration policy is a minefield of controversial issues, and among the most explosive are those programs that permit low-skilled foreign nationals to work in the same labor market as U.S. citizens and permanent resident aliens. Because such endeavors have been undertaken in the past, they have a track record and have been the subject of extensive research. There is no need to speculate about what might happen if any new such venture — such as that proposed by the Bush Administration on January 7, 2004 — were to be enacted. The outcome is easily predicted.