On the Structure of Syntenic Distance 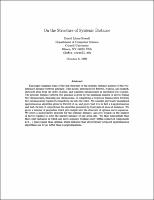 This paper examines some of the rich structure of the syntenic distance measure of the evolutionary distance between genomes. This model, introduced by Ferretti, Nadeau, and Sankoff, abstracts away from the order of genes, and considers chromosomes as unordered sets of genes. The syntenic distance between two genomes is given by the minimum number of moves (fusing two chromosomes, fissioning one chromosome, or completing a reciprocal translocation between two chromosomes) required to transform one into the other. We consider previously unanalyzed approximation algorithm given by Ferretti et al, and prove that it is in fact a 2-approximation and that, further, it outperforms the algorithm presented by DasGupta et al on all instances. We prove a number of properties which give insight into the structure of optimal move sequences. We prove a monotonicity property for the syntenic distance, and give bounds on the number of moves required to solve the hardest instance of any given size. We then demonstrate that there exist instances in which any move sequence working solely within connected components is $2 - \epsilon$ times longer than optimal, which indicates that all previously proposed approximation algorithms can be no better than 2-approximations.