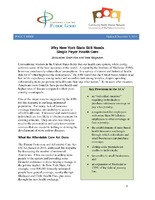 Conventional wisdom in the United States holds that our health care system, while costly, achieves some of the best outcomes in the world. A report by the Institute of Medicine (IOM), however, conclusively refutes these assumptions. In a survey of current and historical health data for 17 other high-income democracies, the IOM found that the United States ranked dead last in life expectancy among males and second-to-last among females, despite spending substantially more per person on health care than any other nation. In measure after measure, Americans were found to have poorer health and higher rates of disease compared to their peer-country counterparts.