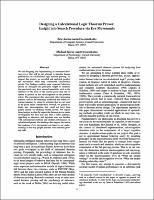 We are designing and implementing an automated theorem prover that will in part attempt to simulate human performance on calculational logic theorem proving. To support this project, we recorded and analyzed people's eye movements while they constructed calculational proofs. Our findings confirm some expected behaviors (based on strategies and principles taught to students) that may previously have seemed untestable, such as the influence of the form of the current proof step and of syntax in general on the microcognition of the problem solver. The experiment also uncovered other interesting patterns, such as the seemingly inefficient but widely occurring tendency to attend to premises that are not used in the proof under consideration. Overall, we gained insights into microcognition that could not have been gained merely by studying written proofs. We expect these insights to directly impact the theorem prover under development, but they may also find a wider audience, appealing to educators and logicians who are familiar with calculational methods and student performance on calculational proofs. Our findings also support the notion that analyses of eye movements can improve our understanding of the way people perform some theorem proving tasks.