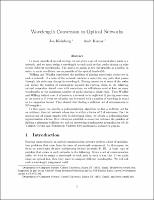 In many models of optical routing, we are given a set of communication paths in a network, and we must assign a wavelength to each path so that paths sharing an edge receive different wavelengths. The goal is to assign as few wavelengths as possible, in order to make as efficient use as possible of the optical bandwidth. Wilfong and Winkler considered the problem of placing wavelength converters in such a network: if a node of the network contains a converter, any path that passes through this node may change its wavelength. Having converters at some of the nodes can reduce the number of wavelengths required for routing, down to the following natural {\em congestion bound}: even with converters, we will always need at least as many wavelengths as the maximum number of paths sharing a single edge. Thus Winkler and Wilfong defined a set $S$ of nodes in a network to be {\em sufficient} if, placing converters at the nodes in $S$, every set of paths can be routed with a number of wavelengths equal to its congestion bound. They showed that finding a sufficient set of minimum size is NP-complete. In this paper, we provide a polynomial-time algorithm to find a sufficient set for an arbitrary directed network whose size is within a factor of $2$ of minimum. For the special case of planar graphs with bi-directional edges, we obtain a polynomial-time approximation scheme. Our techniques establish a connection between the problem of finding a minimum sufficient set and an interesting simultaneous generalization of the Vertex Cover and Feedback Vertex Set problems in undirected graphs.