Geo-demographic Differences in Knowledge about the Restaurant Tipping Norm 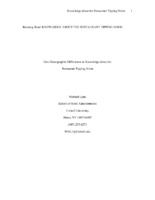 A national telephone survey indicated that knowledge about the restaurant tipping norm is greater among people who are White, in their 40’s to 60’s, highly educated, wealthy, living in metropolitan areas, and living in the North East than among their counterparts. These findings support the idea that differential familiarity with tipping norms underlies geo-demographic differences in tipping behavior. An educational campaign promoting the 15 to 20 percent restaurant tipping norm is needed to reduce geo-demographic differences in tipping and to increase the willingness of waiters and waitresses to serve all customers equally.