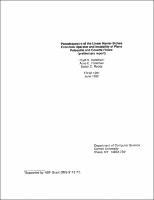 This is a rough, interim report on some new results concerning the stability of plane Poiseuille and Couette fluid flows, following upon recent work by Henningson and Reddy, Butler and Farrell, Gustavsson and others. We emphasize that the conclusions proposed here have not yet been checked carefully and are subject to change. Our principal results are as follows: 1. Plots of the spectra of the "full" Navier-Stokes operator for Poiseuille and Couette flows, i.e., without restriction to a wave number pair ($\alpha, \beta$) or to even or odd modes ($\S\S$4,5). 2. Analogous plots for the pseudospectra of this operator. Comparison of the pseudospectra with the spectra gives a new interpretation of why the physics of these linear flow problems is not controlled by the location of the most unstable eigenvalue ($\S\S$4,5). 3. Demonstration that these pseudospectra predict the Butler-Farrell "optimal" transient energy growth ratios to within a factor of about 2 ($\S$6). 4. Demonstration that about 90% of the Butler-Farrell growth can be achieved by a 3$\times$3 linear model obtained by projecting the Navier-Stokes problem onto the space spanned by three dominant eigenmodes, for Couette flow, or four in the case of Poiseuille flow ($\S$8). 5. Demonstration that although 1 Orr-Sommerfeld mode and 3 Squire modes suffice for the 4$\times$4 model in the Poiseuille case, in keeping with a recent result of Gustavsson, one can do equally well with 2 modes of each kind or with 3 Orr-Sommerfeld modes and 1 Squire mode ($\S$8). 6. Demonstration that the minimal operator perturbation required to destabilize a stable flow has norm of order $R^-$$^2$, where $R$ is the Reynolds number, though the distance of the least stable eigenvalue from the real axis is $O (R^-$$^1$) ($\S$7). 7. Presentation of a 2$\times$2 model illustrating that if the linear problems described above are capable of transient energy growth of order $M$ (e.g., $M\approx$1000 according to Butler and Farrell), a weak and intrinsically energy-conserving nonlinear term can "bootstrap" that growth to a higher order such as $M^2$. This supports the view that although nonlinear terms are of course essential to the subcritical instability of fluid flows, the detailed nature of the nonlinear interactions may sometimes be relatively unimportant ($\S$2). 8. Adaptation of this "bootstrapping" idea to the fluid flows considered earlier, particularly the 3$\times$3 approximation for Couette flow with $R$=1000.