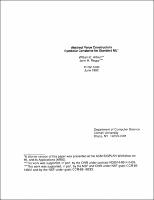 Standard ML (SML) has been used to implement a wide variety of large systems, such as compilers, theorem provers, graphics libraries and even operating systems. While SML provides a convenient, high-level notation for programming large applications, it does have certain deficiencies. One such deficiency is the lack of a general mechanism for assigning symbolic names to constant values. In this paper, we present a simple extension of SML that corrects this deficiency in a way that fits naturally with the semantics of SML. Our proposal is a generalization of SML's datatype constructors: we introduce constants that generalize nullary datatype constructors (like nil), and