Fault-Tolerant Broadcasts and Multicasts: The Problem of Inconsistency and Contamination 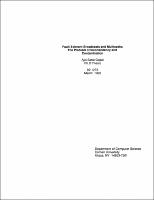