On The Structure Of NP Computations Under Boolean Operators 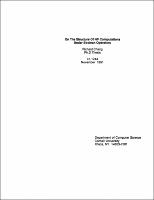