Theory of R-functions and Applications: A Primer 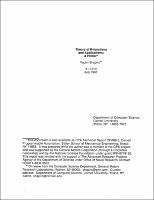 An R-function is real-valued function characterized by some property that is completely determined by the corresponding property of its arguments, e.g., the sign of some real functions is completely determined by the sign of their arguments. More generally, such a property could be determined by some partition of the real axis. If the axis is partitioned into $k$ subsets, each $R$-function corresponds to a companion function of $k$-valued logic. This relationship allows one to represent a logical predicate of $n$ variable by a real-valued function of $n$ arguments. The latter can be evaluated, differentiated, and possesses many other interesting properties. V.L. Rvachev first suggested $R$-functions in l963. Since then, he and his colleagues have significantly developed the theory and found many applications. Their work is described in numerous books and articles, unfortunately mostly in Russian. A complete list of references through l987 can be found in [Shi88]. An important application of $R$-functions is in the description of geometric objects. Any object defined by a predicate on "primitive" geometric regions (e.g. regions defined by a system of inequalities) can now be represented by a single inequality, or equation. Furthermore, these real-valued functions can be constructed so that they have certain useful logic and differential properties. Application of theory of $R$-functions could have a profound effect on many problems where geometric information can be accounted for analytically. For example, according to [Rva82], $R$-functions have found applications in many unexpected areas, such as study of stability of motion, medical diagnostics, and chemical engineering, in addition to those described in this report. This primer summarizes some basic results from the theory of $R$-functions and decribes (rather superficially) some of the applications studied in the Soviet Union. As far as I know, this is the first such introduction to $R$-functions in English. Its main purpose is to stimulate interest in $R$-functions in the research community; it is not intended to serve as a comprehensive reference. While this document contains no original results, absorbing, translating, interpreting, and condensing the contents of the references did require a substantial judgement on my part. The original sources offer a wealth of additional material that was omitted for the sake of simplicity and coherence of this document. Thus, I also accept the responsibility for all mistakes, misinterpretations, and omissions in this report. While the main applications of $R$-functions have been in the description of geometric objects, the developed theory does not seem to rely on many known results in combinatorial, algebraic, and computational geometry and topology. In an effort to preserve the spirit of the original work, I resisted making "improvements" in the presentation.