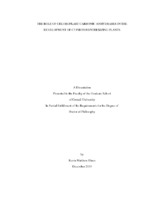 Carbonic anhydrase (CA, EC: 4.2.1.1) is a zinc-bond metalloenzyme that rapidly catalyzes the reversable hydration between carbon dioxide and water with bicarbonate. C3 photosynthesizing plants contain very highly expressed CAs in their chloroplasts, which can represent over 2% of all soluble protein. However, no single role has been assigned to CA and its activity in the stroma, although they are proposed to have a myriad of duties, from oxidative stress tolerance and plant defense to macromolecule biosynthesis and pH buffering. Previous research exploring the function of chloroplast CA have focused largely on deactivating or deleting βCA1, the most highly expressed CA and the first to be identified in the chloroplast. However, no study has completely removed all CA enzymes from the chloroplast stroma and observed the effects. Using the model Nicotiana tabacum (tobacco), I identified two stromal CAs, βCA1 and βCA5, and produced CRISPR/Cas9 mutants targeting both genes. While the single knockout lines Δβca1 and Δβca5 had no striking phenotypic differences compared to WT plants, Δβca1ca5 leaves developed large necrotic lesions. Leaf development of Δβca1ca5 plants normalized at the high CO2 concentration of 9000ppm. High CO2-grown Δβca1ca5 mutants had no measurable defect in photosynthetic capacity when measured at ambient CO2 Δβca1ca5 seedling germination and development is negatively affected when seedling development occurs at ambient CO2. A series of complementation experiments using altered forms of βCA1 were carried out in Δβca1ca5 plants. Constructs expressing full length βCA1 and βCA5 proteins complemented the Δβca1ca5 mutation, but inactivated (ΔZn-βCA1) and cytoplasm-localized (Δ62-βCA1) forms of βCA1 failed to reverse the mutant phenotype. When infected with tobacco mosaic virus (TMV) Δβca1 and Δβca1ca5 tobacco failed to show the hypersensitive response (HR), while expression of ΔZn-βCA1 restored the response. Thus, stromal CAs play major roles in plant development and defense.