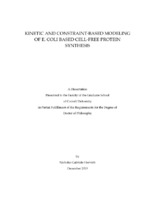 Cell-free protein synthesis is a powerful technology for applications ranging from therapeutics to synthetic biology. Cells are lysed to produce an extract that is used to conduct gene expression in vitro, avoiding the limitations inherent to cell-based systems such as physical barrier of the cell wall and the resource consumption of growth. While useful, this approach has struggled to attain the product yields and reaction times necessary to become a mainstream, industrially viable technology. Metabolic modeling of biological systems can provide insight into underlying mechanism, identify bottlenecks, and suggest system perturbations to improve productivity. Toward this goal, we employed three strategies to model E. coli cell-free protein synthesis: constraint-based, kinetic, and dynamic constraint-based. Sequence-specific constraint-based modeling was used to predict the performance of CFPS for a variety of proteins based on protein length and promoter type. Next an ensemble of kinetic models was used to understand the productivity and yield of E. coli cell-free metabolism under glucose as well as alternative substrates. Model interrogation showed that allosteric control of enzymes was important to system dynamics but not to protein production, and that the most critical pathways for both protein productivity and overall metabolism were oxidative phosphorylation and glycolysis/gluconeogenesis. Dynamic constraint-based modeling highlighted the robustness of protein production to the different pathways of substrate utilization, showed that measurements of central carbon metabolites were most useful to characterize network dynamics, and suggested that despite comprehensive metabolite data, fluxes were still largely unidentifiable. Microfluidic systems, long popular in synthetic biology for their modularity, low cost, and ease of construction, as well as the ability to measure and manipulate metabolites in real-time, have also contributed to improving cell-free protein synthesis. We adapted a glucose oxidase assay to run continuously on a microfluidic device to gain an understanding of in vitro reaction dynamics on-a-chip. An inverse relation was observed between the flow rate through the chip and the extent of reaction. According to a plug-flow reactor model and first-order kinetics, the reaction rate constant was estimated at 46 h-1. Taken together, these modeling approaches and experimental analysis provide an important step toward the goal of point-of-care protein production.