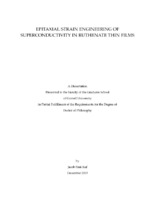 Superconductivity is among the most fascinating emergent states of quantum matter. Despite garnering intense research interest over the past 100 years, a detailed understanding of how features of the electronic structure determine superconducting properties has remained elusive. For example, the ability to deterministically enhance the superconducting transition temperature ($T_c$) by design, rather than by serendipity, has been a long sought-after goal in condensed matter physics and materials science, but achieving this objective may require new tools, techniques and approaches. This dissertation describes an approach towards achieving this goal referred to as strain engineering exploiting epitaxy. Superconducting thin films of two different ruthenium oxide materials, Sr$_2$RuO$_4$ and RuO$_2$, are synthesized by molecular-beam epitaxy on deliberately lattice-mismatched substrates, and a comprehensive suite of characterization techniques---including x-ray diffraction, low-energy electron diffraction, electrical transport, angle-resolved photoemission spectroscopy, and density functional theory calculations---are applied to understand the relevant structure-property relationships in these materials. Namely, we seek to identify how substrate-imposed strains freeze in specific distortions of the parent bulk crystal structure in thin films, how these distortions couple to the electronic structure, and ultimately, how these distortions affect the superconducting $T_c$. In the extremely disorder-sensitive unconventional superconductor Sr$_2$RuO$_4$, we demonstrate that synthesizing epitaxial thin films on substrates that apply anisotropic in-plane strains is a facile way to increase the energy scale of superconductivity, to values well in excess of the bulk $T_c$. This observation is in good agreement with recent work on single crystals subject to uniaxial pressure. We then employ results for films synthesized on different substrates that apply different modes and magnitudes of biaxial strain to gain insight into the exact mechanism that drives this $T_c$ enhancement. Our results suggest that enhancing the density of states near the Fermi level, $E_F$---achieved by tuning the proximity of $E_F$ to a Van Hove singularity in the electronic structure---is not the only factor that boosts $T_c$ in strained Sr$_2$RuO$_4$. In RuO$_2$, we report the first instance of transmuting a normal metal into a superconductor through the application of epitaxial strain. Bulk RuO$_2$ is not known to be superconducting down to the lowest measured temperatures. In agreement with this observation, we show that lightly strained RuO$_2$ thin films synthesized on isostructural (101)-oriented TiO$_2$ substrates are also non-superconducting; in contrast, we show that superconductivity having $T_c$s up to $\approx 2 \text{ K}$ can be realized by synthesizing more heavily strained RuO$_2$ thin films on (110)-oriented TiO$_2$ substrates. Using ARPES measurements supported by DFT simulations, we reveal the primary electronic mechanism underlying this strain-stabilized superconductivity in RuO$_2$/TiO$_2$(110): the anisotropic strains imposed by the substrate redistribute the charge carriers amongst the manifold of $4d$ states near $E_F$, partially depopulating flat bands with $d_{}$ orbital character, and thereby increase the density of states near $E_F$. Taken together, our results indicate that epitaxial strain engineering can likely be broadly applied to modulate superconductivity in a wide variety of multi-orbital systems, extending well beyond just the ruthenates investigated in this dissertation. In addition to being a practically feasible route to enhancing $T_c$ and discovering new superconductors, this method also enables detailed investigations of the electronic structure. Therefore, we propose that the approach outlined here of close feedback between thin-film synthesis, structural and electrical characterization, and materials-specific calculations, could be a powerful platform moving forward in the quest to rationally control superconductivity.