Chamber with Winds and Rains: On the Collecting Practice of Deng Shi and His Contemporaries 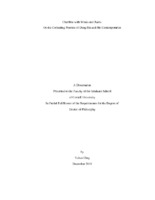 During the historical transition period from Qing empire to early Republic, China was influenced by two concurrent forces that were reshaping society: the introduction of Western learning and the anti-Manchu Movement. Synthesizing the zeitgeist, the last generation of Qing intellectuals proposed a retrieval of China’s cultural past to correct ineffective Qing policies. Their ambitious efforts ultimately expanded to the preservation, re-collection, and reframing of the totality of China’s ancient arts and antiquities. In this late Qing intellectual trend, promoted by Deng Shi and his fellows within the National Essence Group, Chinese art was for the first time recognized as part of “national learning” and “national essence.” Traditional antiquarian activities were challenged by contemporary issues that emerged from political and educational reform, locality, and concepts of nation-building and modernization. As a national essence man, collector and publisher, Deng Shi differentiated himself from collectors of the past by enlisting his private collection in the broader mission of preserving ancient relics and antiquities. He also advocated for an all-embracing definition of Chinese art that accepted the historically non-traditional as part of a national past. At the same time however, Deng saw the value of literati culture in the framing of Chinese art. His large collection of Ming loyalist art reflected a rising concern among progressive Chinese intellectuals who saw the harm of an absolute monarchy to Chinese society and culture. His promotion of literati cultural practices from painting to rubbing was an indigenous response to the Western collection of Chinese art at the time, an effort that ultimately clarified the boundaries of traditional fine art for later individuals to approach Chinese art more critically.