Does Watching Mukbangs Help You Diet? The Effect of the Mukbang on the Desire to Eat 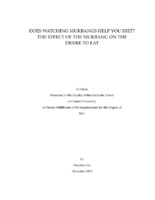 While previous literature suggests that food videos motivate people to eat more, many Asian women watch the mukbang, an online eating broadcast where the host consumes large amounts of food, to diet and might get vicarious satiation. The current study is designed to find the effect of the mukbang on dieters. Two randomized controlled studies were conducted and female participants were randomly selected to watch either a mukbang or a non-food related video. A third study assigned participants to watch one of three videos: a mukbang, a cooking show or a non-food content video. All studies found that women who watched the mukbang reported lower satiation level and higher desire to eat the food shown in the mukbang compared to people who watched non-food content videos. Mukbangs made people feel less satiation compared to cooking shows. Dieters had less interest in eating after watching videos compared to non-dieters. Overall, however, all studies found that mukbangs caused dieting women to have a stronger desire to consume food. Moreover, although people who used mukbangs to diet had stronger self-control compared to others and held stronger beliefs that mukbangs could influence their control of their appetites, I found no evidence that their desire to eat foods decreased after mukbang viewing.