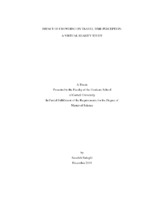 Congestion inside a vehicle and travel time are two important influences on utility of a public transport trip. According to psychology literature, perceived time is a subjective measure of duration, which can be distorted by emotions. On the other hand, crowding can cause negative feelings in travelers. Accordingly, we hypothesize that the negative feelings induced by high passenger density can lengthen the perceived travel duration. We set up a novel behavioral experiment using Virtual Reality (VR) technology to address this hypothesis, by simulating short immersive subway trips with different density of virtual passengers. In a first task, retrospective time judgements were obtained after two consecutive trips. In a second task, prospective trip duration estimate, as well as subjective emotional valence of the trip were acquired after each of 5 trips with different passenger congestion levels. Results of the first task only showed an effect of trip order on estimated times. However, in the more comprehensive second task, as predicted, travel time was estimated significantly longer by an increase in passenger density. Further analysis confirmed that this effect is mediated by the negative feelings induced by crowding. Finally, preferences of participants in a Stated Choice (SC) task were compared with responses in the VR task. Results revealed that individuals who disutilize passenger density more negatively in the SC task, also feel more unpleasantly during higher density VR trips. This confirms the validity of hypothetical SC tasks in reflecting individuals’ actual feelings about crowding. This study demonstrates the applicability of VR technology for interdisciplinary research intersecting psychology and transportation. Future research about the implications of the observed interaction between crowding and perceived travel time, in route choice modeling is encouraged.