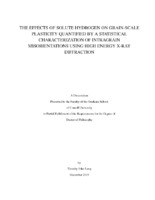 In this dissertation, we quantify the impact of solute hydrogen on grain-scale plasticity in pure nickel using multi-grain high energy x-ray diffraction (HEXD) and a simple model of single crystal plasticity. Our work was motivated by hydrogen embrittlement, which is the loss of ductility and toughness that solute hydrogen causes in a metal. The focus on grain-scale plasticity was motivated by the discrepancy between traditional microscale and macroscale studies on the impact of hydrogen on plasticity. There are three studies we discuss in this dissertation; in the first we probed samples deformed \textit{ex-situ} to large strains by high pressure torsion (HPT) to establish whether solute hydrogen does impact grain scale plasticity. To process the data from those samples we developed a new data processing method that calculates discrete single grain orientation distributions (DSGODs) and quantifies them with three metrics. Using those metrics, we found solute hydrogen only affects the plasticity in some grains, not all grains. Neither the metrics nor the DSGODs could be directly inverted to spatial distributions of deformation, so in the second study we used a simple forward model of single crystal plasticity to perform a parametric study investigating how localized deformation might impact the metrics of the DSGODs. We identified a signature of localized deformation in the DSGODs and used it to conclude that the deformation in the hydrogen-affected grains in the HPT samples was localized to a smaller sub-volume or sub-volumes of the grains. In the third study, we began to investigate what factors cause deformation to localize in some grains by probing a sample deformed \textit{in-situ} by uniaxial tension. By using existing multi-grain HEXD data processing tools and our DSGODs, we determined solute hydrogen either decreases the slip system strength or increases the deviatoric shear stress, the driving force for plastic slip, in the regions where localization occurs. We are currently not yet certain which is the root cause. We also confirmed our earlier finding that solute hydrogen does not impact all grains equally and discovered that the effects of solute hydrogen on plasticity can begin well inside the macroscopically elastic region of the stress-strain curve, earlier than previously reported. These findings are a significant step forward in bridging the gap between microscale and macroscale results on the impact of solute hydrogen on plasticity. Finally our method for calculating DSGODs, the metrics we used to characterize them, and the signature of localized deformation in those metrics can all be applied to other studies of plasticity and localization, which include other important areas like fatigue.