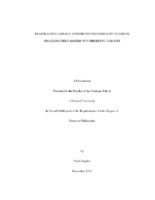 Cassava is the second most important staple food crop in Uganda. However, the adoption of improved varieties remains low, partly because some improved varieties do not have the attributes preferred by end-users. To contribute towards addressing this gap, I conducted three studies: 1) Examining cassava attributes preferred by smallholder farmers in four districts within Uganda. Results revealed yield (many roots and big root size),, early maturity, and root quality (taste, long in-ground storability of roots, softness of cooked roots, and non-bitter roots) were predominant attributes preferred by farmers; 2) Determining heritability of softness of cooked cassava roots, one of the key attributes preferred by end-users. Softness was evaluated at four cooking time intervals: 15, 30, 45, and 60 minutes using a penetrometer on 268 cassava genotypes. Estimates of broad-sense heritability ranged from 0.17 to 0.37, with the highest value observed at 45 min of cooking time. I also quantified the relationship between penetrometer and consumer-testing methods for phenotyping softness of cooked cassava roots. The two methods were strongly correlated (r2 = 0.91; P-value = 0.003), suggesting a penetrometer can be used for phenotyping softness; 3) Determining the genetic relationships of cassava varieties grown by farmers in Uganda, and the relationship between farmer-grown varieties and breeding lines. Genotyping-by-sequencing was used to score 287,952 single nucleotide polymorphisms in 547 samples of farmer-named cassava varieties collected by random sampling of 192 smallholder farms within four districts in Uganda, and a panel of 349 breeding lines from the cassava national breeding program in Uganda. The genetic differentiation we observed among farming districts in Uganda (mean FST = 0.003) is similar to divergence observed within other countries. Despite the fact that none of the breeding lines were directly observed in farmer fields, genetic divergence between the populations was low (FST = 0.020). Interestingly, we detected the presence of introgressions from the wild relative M. glaziovii on chromosomes one and four, which implies ancestry with cassava breeding lines. Our study highlights the importance of understanding the genetic make-up of cassava currently grown by smallholder farmers and relative to that of plant breeding germplasm.