THE HOPE TO CHANGE A NEIGHBORHOOD: THE OBAMA PRESIDENTIAL CENTER, JACKSON PARK, AND THE PRIVATIZATION OF PUBLIC SPACE 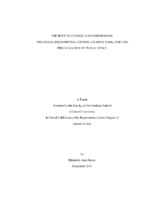 Presidential libraries were formally established in the 1940s as a way to collect presidential records, provide a space for research, and found a museum for interpretation of the president’s life and legacy. President Barack Obama, following two terms in office, decided to establish the fourteenth presidential library in a historic park on the South Side of Chicago. Changes in protocol and a pushback against the use of public land has considerably delayed construction and forced questions regarding the nature of presidential libraries and Chicago’s outlook on their public parks. This thesis, written and researched while the issue remains ongoing, focuses on the decision to locate in a public park while the Obama Presidential Center, breaking from precedent, will be privately run by the Obama Foundation—as well as not following the traditional roles of a presidential library. This presents long-term problems for the continued protection of Chicago’s parks and paves the way for further private investment in public spaces.