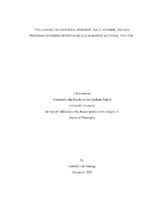 “Following the Internal Whisper”: Race, Gender and the Freedom-Centered Trinity of Black Women’s Activism, 1735-1850,” explores how race, gender and class shaped a distinct activist tradition among Black women that was indispensable to the struggle for Black freedom in the United States. It argues that African American women were fighting for freedom long before the nation was founded and nearly a century before the interracial and international Abolitionist Movement emerged. Using an array of archival material including speeches, obituaries, wills, memoirs, pamphlets, newspaper articles and anti-slavery records, this dissertation traces a rich, yet virtually unexplored, tradition of Black women’s activism centered around three intersecting tiers: spirituality, education, and communalism. This trinity allowed Black women to build and serve their communities and take on leadership roles despite racist and sexist exclusions. The focus on early America is significant because Black women’s activism provided important building blocks for women’s participation in the Abolitionist Movement, the Women’s Rights Movement, and nineteenth century American reform. Black women had an early, consistent, and evolving impact on the struggle to end slavery and racial oppression in the United States, yet scholars have yet to engage the full scope of their contributions. In addressing this gap in the extant scholarship, this dissertation centers race and gender to underscore the significance of Black women’s work, as well as the challenges they faced struggling for racial equality within a patriarchal society. As preachers, teachers, and community leaders, Black women such as Jarena Lee, Maria Stewart, and Susan Paul promoted education as a tool for liberation and argued that freedom and equality were God’s will. They boycotted slavery through the Free Produce Movement, formed antislavery societies, and were integral to the Underground Railroad. While their primary focus was abolition, Black women also embraced women’s rights, temperance, spiritualism, and moral reform in their fight for freedom and equality. This dissertation adds to the fields of African American Studies and Women’s Studies by documenting this forgotten chapter in Black women’s history.