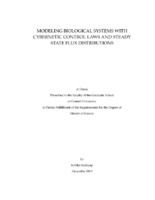 Metabolism is a process by which organisms extract energy from its environment to power itself. The interplay between cellular environment, nutrients present and the chemical reactions occurring within the organisms dictate the execution of metabolism. Single cell microbes, such as E. coli, P. putida and yeast, can be redesigned to be miniature chemical reactors that transform sugars and other carbon sources into biofuels. Enhancing bio-process conditions can stimulate the production of therapeutic proteins in mammalian cells. Hence, understanding the strategy of metabolism in organisms would help us build better technologies for controlling formation of end products like cell mass, biofuels,therapeutic proteins etc. Steady state flux analysis techniques have gained a lot of popularity in the field of systems biology due to successful qualitative analysis of large scale metabolic networks. This technique has been used to improve production of ethanol in Saccharomyces cerevisiae and lactic acid in Escherichia coli (E. coli), to name a few examples. Despite this success, its major shortcoming re-mains in providing quantitative measurements of metabolite profiles that can be further validated with experiments. Previous cybernetic models have accurately validated experimental results and described molecular processes governing metabolism, but their application is limited to small scale metabolic net-works. We have built a mathematical framework that combines solutions from steady state flux analysis with cybernetic principles to overcome the challenge of describing metabolic data for large scale metabolic networks. We have established computational models that can capture dynamic metabolic regulation in bacterial and mammalian cells. These models integrate chemical kinetics, mass balances, enzyme catalysis and stoichiometric laws to predict biology that can help us optimize cellular machinery towards bioproduct formation.