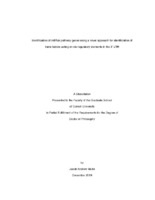 The 3′ untranslated regions (UTR) of mammalian genomes are well conserved and play an important role in regulation of the mRNA, serving as a binding site for many different regulatory factors. The majority of RNA binding proteins (RBP) involved in post-transcriptional regulation target cis-regulatory elements found within the 3′ UTR, however hundreds of proteins have been predicted to contain RNA binding domains and only a modest subset has been studied. While many of these trans-factors and their corresponding cis-regulatory elements have yet to be investigated, microRNAs (miRNA) and their corresponding target sites represent a relatively well understood trans-cis-regulatory paradigm for the regulatory biology of 3′ UTRs. miRNAs are an important class of small (~22nt) noncoding RNAs that regulate gene expression post transcriptionally, targeting transcripts containing complementary target sites primarily found within the 3′ UTR, and which recruit additional factors that promote accelerated decay and translational repression. Although the core components of the miRNA biogenesis and effector pathways have been discovered, there exist multiple gaps in our understanding of miRNA biogenesis and function. For example, many questions remain regarding the mechanism by which miRNAs are able to direct translational repression and accelerated mRNA decay, and most current models suggest the existence of additional, currently unknown, components of the silencing pathway. To identify novel miRNA pathway genes, I developed a high throughput screening method which can be used to identify trans-factors responsible for the function of 3′ UTR cis-regulatory elements. This screening method was accomplished by developing a fluorescent reporter cell line sensitive to RNAi perturbation events that alter miRNA-mediated repression and performing a high throughput RNAi screen using a pooled lentiviral short hairpin RNA (shRNA) library containing ~55,000 shRNAs targeting ~11,000 genes. Fluorescence activated cell sorting (FACS) was used to enrich cells experiencing elevated or depressed levels of miRNA mediated repression acting upon the fluorescent reporters, and high throughput sequencing to identify the shRNAs underlying altered reporter activity. Analysis of enriched shRNAs thereby allowed the identification of candidate genes involved in the miRNA pathway. The successful enrichment of known miRNA pathway genes validated the efficacy of this approach and identified candidate genes not previously known to participate in miRNA silencing. Follow-up validation experiments provided further support for 19 candidates. Finally, I generated CRISPR knockout cell lines for a single candidate, KRBOX4, analysis of which provided additional evidence, suggesting a potential role for this gene in miRNA silencing.