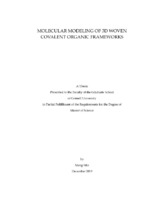 Mesostructured porous materials, especially metal-organic framework systems (MOFs), have received widespread attention by researchers over the course of several decades, aimed at exploiting their suitability as sensors, catalysts, adsorption materials, etc. These materials may exhibit high thermal stability for a variety of physical and chemical reactions, benefiting from their unique structural features such as their crystalline order and high internal surface area. Recently, within this class of materials, Covalent Organic Frameworks (COFs) are of particular interest, as they are generally composed of light elements, and offer nanoporous crystalline structure. In this work, we offer an atomic-scale view of the recently synthesized 3D woven COFs, known formally as COF-505-Cu and COF-506-Cu, using molecular simulation techniques, including ab initio Density Functional Theory (DFT) and Molecular Dynamics (MD). First, we explored the reversible demetallation of COF-505-Cu. Serving as the “linkers” of the structure, the covalent bonding between the metal atom and the organic thread is essential to maintain the overall weave of the structure. We proposed two distinct pathways for the demetallation reaction that breaks the covalent bonding, and calculated their respective free energy barriers. We also tested the re-insertion of other, as yet experimentally untested transition metals (Zn and Fe), to the structure, and found that re-formation of the covalent bonding with the metal is strongly affected by the nature of the ionic complex being inserted. Second, we studied the second-generation, non-interpenetrated, COF-506-Cu that was first synthesized in 2018. We adopted the potential function parameters devised for its predecessor (COF-505) to model this material. This force field model was then used to characterize the nature and rate of guest molecule diffusion and uptake in the COF-506-Cu weave. We found that the presence of more guest-accessible space inside the weave greatly increased the diffusion of small molecules, compared to the limited diffusion observed by Acevedo in COF-505. But for other molecules, like the larger THF and methyl orange, movement inside the weave is still constrained through molecular interactions to be tortuous and relatively slow; this was suggested without direct observation in the experimental work. The computationally predicted uptake of THF vapor compared quantitatively well with the experimental data. Those results provided strong validation of the original Acevedo force field model. Looking to the future, the validation of this model could provide a way to predict the efficacy of COF-506, or other variants of this woven COF, ahead of experimental synthesis or applications such as molecule capture (adsorption), separation processes, or catalysis.