Tell Me More: Release of the 2014 IPCC AR5 Synthesis Report and Climate Change Opinions in the United States 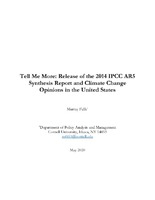 Climate change is a consequential and urgent issue. Now more than ever, there is a strong global scientific consensus on the occurrence of climate change and its human causes, as demonstrated in the Intergovernmental Panel on Climate Change’s (IPCC) most recent assessment report—the 2014 AR5 Synthesis Report. Understanding public opinion on this issue is essential due to the public’s ability to set the policy agenda and establish policymakers’ goals. Using repeated cross-sectional survey data from 2011 to 2017 from the Yale Program on Climate Change Communications’ “Climate Change in the American Mind” study, the objective of this paper is to examine the influence of the 2014 IPCC AR5 Synthesis Report on public belief in the occurrence and cause of climate change in the United States. Conducting a series of linear probability models (LPMs), this paper finds no significant change in the public’s belief that climate change is happening and human activities are mostly to blame directly stemming from the Synthesis Report’s release. However, this analysis confirms and builds upon prior literature and polling data revealing growing partisan differences in climate change beliefs. Despite the growing partisan divide on climate change opinions, this analysis does find a significant, increasing shift in opinion toward the scientific consensus. This paper concludes that, while the direct influence of the AR5 Synthesis Report on public opinion is not statistically significant, the Report is likely one of many factors contributing to the public’s growing belief in climate change and its anthropogenic influences.